In what I hope to make an annual thing, I’d like to use this post to look back over 2017.  The travels, what cameras/lenses I favored, and what my favorite images of the year are.  Here we go, starting with the most straight forward items. 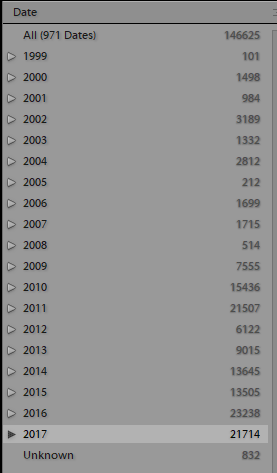 For cameras per year, it is clear, I favored the D750 over the D800, which is the second year in a row.
It really wasn’t even close.  I think the weight of the camera, combined with the high burst rate really led me to favor this camera.  I also like to use this camera for night time time-lapse/star trails, which artificially inflates the camera usage – 1000 photos taken may only result in 1 final image.
The Leica is the only camera on the list that I do not own.  I had the chance to use it for an afternoon, which was a ton of fun. 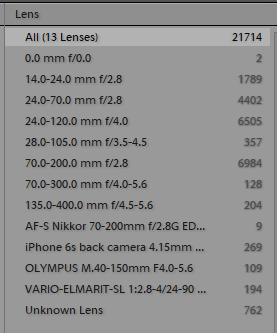 The breakdown of Camera:Lens combinations is:
D800

Originally I was going to put my favorite images of 2017 in this space, but I’ve decided to hold that for a new post in the next week or so.  Knowing me, it will take longer, but we shall see.

2017 was a small year for purchases.  I purchased a new camera bag for international travel and a new travel laptop.

My trip to Greenland was by far the largest excursion of 2017.  Other than this trip, I had a weekend in Utah; some day trips in and around Seattle; and some visits to family that allowed me to take some photos.

The Bad Stuff – Repairs and Damage

I hope this section doesn’t have large entries every year.  But this year has a frustrating entry.
This year, my D750 was subject to a recall on the shutter.  When I received the camera back after the first repair, there were issues with the reassembly of the camera.  It had to go back in to be reassembled properly.  I was lucky, as the camera nearly didn’t make it back to me for my Greenland trip.  But, I am also thankful to Nikon who went out of their way to ensure that happened.  I am also quite thankful that my D750 has a brand new shutter.  While my D750 has taken nearly 30,000 photos, the shutter only has around 6900.  The D750 will likely continue to be in use for 3-6 more years.
Outside of this, my gear experienced nothing more than normal wear and tear.
2018
Let’s now look at my plans for this current year.
Due to job-related reasons, I’ve relocated from the PNW to Pennsylvania.  But I’ve found a nice place near my new job and not too far from the outdoors.  So I’ll be photographing a new area of the country with new parks and things to explore.  I’ll also be visiting the Atlantic Ocean, which is fun.
In 2018 I hope to have a few more business-oriented aspects to my photography.  Until now, it has been mostly for fun.  In this new year, I hope to pursue tasks which offset the cost of my camera gear and travels.  More details as they become available and I can actually make them happen.
I’m also testing the water with video and learning the basics of producing a video.  I have an idea that I hope to launch in 2018.
Until the next post
-Brad