Miyajima is an island in the Hiroshima Bay of Japan.  The best known structure on the island is the Torii gate that appears to float on the water at high tide. 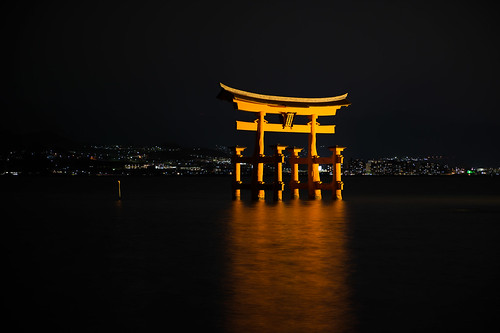 At low tide, you are able to walk out to the gate.  Most of the island is protected wilderness.

The island has a traditional rice dish that involved an oversized rice spoon.  There is a lot of history behind this rice spoon, it is everywhere on the island, and is not found outside of the island.  They also make small cakes in a maple leaf shape that are delicious.  They catch an oyster in the nearby waters, which can be prepared anyway you can imagine (raw, grilled, etc).

How to get here – Miyajima is located near Hiroshima.  There are several options to get to the island

There is also a ferry from Hiroshima to the island which takes about 50 minutes.

There is much more to the island than its shrine.  There is a cable car to the top of the island.

How much time should you spend on the island?  I would allow for at least one full day.  If you can stay on the island, it is really a neat place at night, especially if you can time the high tide to occur after dark.

On the higher side, unless you have a good reason, more than 2 days is overkill.

Where to stay on Miyajima-

I have personally stayed at the Jukeiso ( http://www5a.biglobe.ne.jp/~jukeiso/index02.html ) and the Auberge-Watanabe ( http://www.auberge-watanabe.com/english/ ).  The Jukeiso can be better described as a small hotel.  The Watanabe was one of the neatest very small hotels I’ve ever seen (I think they only have 3-4 rooms).  Most places on the island have limited ‘Western’ style accommodations, and many do not take credit card reservations on the internet (for the Watanabe, I had to call them to give them my credit card information).  Many places (including the two places I stayed) have dinner and breakfast included in the cost of your stay.

One really interesting thing at the Watanabe was two large replicas of WWII battleships.  There was a Japanese battleship with a name I cannot remember, and the American USS Missouri.  The replicas are works of art, and were created by a friend of the Inn’s grandfather.

While on the island, the local’s ability to speak and understand English may be very limited, much more so than a large city.  Many locals who understand both languages are very helpful, and will give you words and phrases if you ask.