I was recently fortunate enough to be able to travel down the Colorado river and photograph the Grand Canyon.
One of the lunch stops on this trip was at Matkatamiba Canyon, which is at mile 148, just before the Matkatamiba Rapids. Our goal was to make it up to one of the waterfalls in the slot canyon and photograph it. Due to how this canyon winds around, it can support a lot of photographers at once at most locations.
Upon arrival, we found the entranceway had deeper water than there was in previous years. 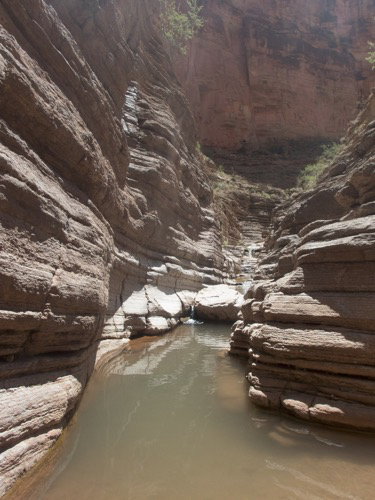 This was not off to a good start. We had to cross a neck deep path with camera gear. While I may have been able to make it, some of the shorter members of the group would not, or at least their camera gear would not.
The solution was to use some of the folding tables as a bridge.

Some of the other people in the group decided to climb the rocks and make it over. Being taller, I took the option of holding my camera gear over my head and wading through the creek.
After passing through this creek, there were two waterfalls to climb. While this first one doesn’t look like much, the right side was extremely slippery, and, at least two people fell. One person managed to have their camera call into the water, but, it was an older Canon 1D series, so it was fine after it dried out a bit.

After this waterfall, there was a chest deep section, followed by a waist deep section, followed by another waterfall to climb. I do not have any pictures of this last waterfall, because there were a bunch of people trying to photograph it, and I wanted to get out of their frames as fast as possible.
At this last waterfall, the slot canyon narrows greatly. I was able to take a quick stop about 1/3rd of the way up to take this photo. There was a small pool here where I could take a small break from the climb.

I was now at a point where only a handful of people would try to venture. Once I got to the top of the stream, I took a look around the corner.

This looked quite nice, and very well could have been my shot. I decided to set up and take a few shots while deciding how much further I wanted to go.

As I was debating whether to continue up or turn back, some other members of my group showed up. One of them climbed up and let us know we were about as far as you could go. I decided if I was almost there, I might as well go to the top. So I did.
About the time I got to the top, a few people were ready to leave. The guides then showed up, having taken a goat trail to get there. They helped a few members of my group get out and head up the trail. A few members of my group decided to start to venture back down the creek. I then had it all to myself.
Since I had all of my camera gear, and a great little spot all to myself, I decided not to waste it, and, carefully set up my camera. At the bottom of the area, there is place to put bags down and keep them mostly dry. Here, there was no such spot.

The pink duct tape on the camera serves a few purposes. #1 – Identification – by the first day, everyone knew that Pink Duct Tape was mine. #2 – Dust Protection – the Grand Canyon has very fine dust that gets everywhere. The duct tape helped keep this dust out of the sensitive parts of the camera. #3 – Pink = Professional. My other camera was marked with Star Wars Duct Tape, so I could tell them apart at a distance.
And here, after all of that story, is the final image. It only took about an hour in Photoshop to get to this point.

Until next time
-Brad